18 months at Georgia Tech for Eleni

Eleni has been awarded a scholarship for a Master of Science in Aerospace Engineering at the Georgia Institute of Technology for 18 months in May 2020. As she decided to pursue her thesis at Georgia Tech, she tells us about her two years there!

Why did you choose georgia tech?

My goal when I chose to complete my education at Georgia Tech was to combine classes in a different educational system with research projects in the Aerospace System Design Laboratory (ASDL). During my first year I was able to contribute to three projects. The first was on optimizing the trajectory of airliners, the second on a network of vertiports for an air cab service, and the last on a new traceability method for aircraft certification. The latter resulted in the publication of a paper at the SciTech conference in January 2022.

This first year has allowed me to explore a wide variety of research areas in which the laboratory works. All of my classes were project-based, so I had to do a lot of presentations and work constantly in groups. I find that this approach is very complementary to the more theoretical teaching of the preparatory school and the French engineering school, and it allowed me to approach from another angle the teaching that I had already had at ISAE-SUPAERO.

What were your impressions of the courses you received?

The solid mathematical, physical and computer foundations provided by the French education system were a real asset during this very intense first year. With the other French people, we could notice the difference in level on the theoretical fundamentals and also the coding practices. On the other hand, we often lacked professional experience in comparison. My organizational, project management and communication skills were really put to the test because of the many obligations to be carried out at the same time and the very free schedule. Indeed, I was surprised at first by the few hours of lectures (less than 10 hours/week) and the absence of tutorials but I got used to the rhythm and then I appreciated having the freedom to choose how much time to spend on each task.

Did you come back to France to do your internship before leaving again for a year?

Yes, at the end of this first year I decided to do an internship at Thales AVS in Toulouse to work on an automatic pilot for helicopters. I wanted to come back to Toulouse after 8 months abroad and I realized while working in the US that I had no experience of working as an R&D engineer in France and therefore no real point of comparison. It also allowed me to discover the field of helicopters. This internship was a real turning point in my training since I decided to focus on the flight dynamics of vertical take-off and landing vehicles (VTOL).

And in the second year?

Georgia Tech is one of three American universities with a research center of excellence (VLRCOE) in this field. During my second year, I took courses in flight design and dynamics specific to helicopters and I invested in two projects. The first one with the Federal Aviation Administration (FAA) whose goal is to study different maneuvers to improve the training and safety of pilots regarding the recovery of unusual flight situations. In this context, I had the opportunity to participate in the HeliExpo forum in Dallas which gathered most of the players in the sector, and it was a great opportunity to see the latest advances in the field. The second project I participated in was a student competition to design an electric VTOL adapted for people with disabilities. It was these two projects that made me decide to stay on as a thesis student at Georgia Tech after my Master’s degree. 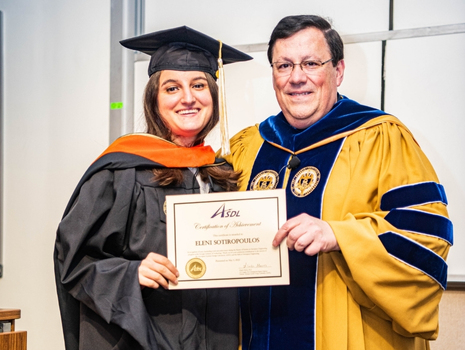 What did you think of life in the United States?

As far as daily life in the United States is concerned, I did not expect a major culture shock since I thought that the American way of life was quite similar to ours. And yet I had a hard time adjusting to the environment designed for cars in the southeastern United States. Outside of the campus, there is not really a pedestrian downtown like I had seen in other American cities on the West Coast. In France, I have always lived in a city where everything was accessible by foot, bicycle and transportation. But in this region the cities are very far from each other, and the majority of the territory is occupied by forests and swamps. So at first I felt a bit trapped without a car, but I really enjoyed the cosmopolitan environment of the university and my lab in particular, which brings together students from all continents and all ages. It allowed me to meet people with very different backgrounds and to get out of the student atmosphere I had been in until then.

The relationship of Americans to consumption and the environment is also something that we have discussed a lot among international students and that really resonated with us. Indeed, my American friends don’t really understand our frustration with lights on all the time in all the buildings, outdoor pools heated all year long and air conditioners set at 19°C – even at Georgia Tech, which has a master’s degree in environment and renewable energy. After a quick and probably unreliable survey from an outraged German friend, it seems that Americans even leave the water running when they lather up in the shower. Their habit of having everything and anything delivered to them all the time rather than going to the store or restaurant is already well established here, whereas it has barely arrived in France. And so we’re already seeing the consequences here, there are far fewer restaurants and grocery stores downtown, especially in Atlanta’s newer neighborhoods. There is also, of course, the gigantism of meals and quantities in supermarkets where you can buy fresh milk by the gallon and eggs by the pallet.

On a personal level, I continued to climb and joined the varsity team my sophomore year. It allowed me to be around more Americans and to travel because I qualified for the regional championships in Alabama and the national championships in Philadelphia. After being eliminated early in Philadelphia, I spent the rest of the weekend visiting the city, I went to see the famous “Liberty Bell”, but also the Constitution Museum and the “Hall of Independence”, which allowed me to fill in some of my gaps concerning the history of the United States. Otherwise I didn’t see much difference between the climbing communities in France and in the United States which allowed me to integrate easily once I learned the English vocabulary. I also continued my commercial pilot training with the university’s club, which offers unbeatable rates and support. I am thrilled to be in an environment that allows me to bridge the gap between theoretical study and flight. This allows me to be aware of the real constraints of maintenance, noise, traffic management, pilot capacity for example, which tend to be neglected in design courses. In my research it is also very useful since I have to prepare flight situations to be executed in a simulator and then study the decisions and reactions of pilots.

What about your graduation?

Finally, graduation is probably the most memorable moment of these two years. My family was finally able to visit me and attend graduation ceremonies. The first one organized by the laboratory was very moving, we all made a small speech with sometimes laughter and sometimes tears and especially a lot of gratitude. The second one, the real one, was more grandiose but also more impersonal where we were several thousands to pass on the stage to shake the hand of the dean and get a diploma, really like in the movies. It was also the last day that I spent with all those who are not staying in Atlanta and are now all over the United States or internationally for some.

THE testimony of Eleni Sotiropoulos-Georgiopoulos 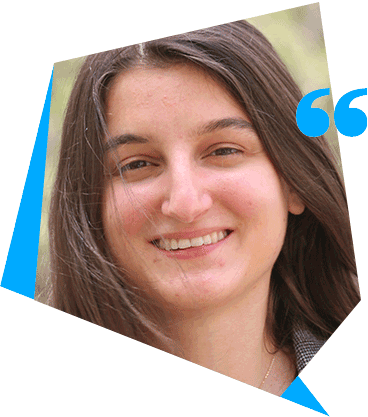 At the end of my master’s degree, I decided to pursue a thesis in the same laboratory. I am currently preparing my thesis entrance exams that I will take in September. I don’t think I’ll be moving to the United States after my thesis, but this expatriation has also allowed me to discover everything I like about the French way of life. I now have a much greater appreciation for all the things I used to take for granted: access to higher education, healthcare, bread, cheese, a daily life without a car… And if/when I come back to France, it will be by choice and not by default, I think it’s pretty great to have had the opportunity to step back from the lifestyle I’ve always known, when I was just expecting to live more or less the same life as I did in France, but in English.

I would like to thank the Foundation for the help received. I am grateful to have had this opportunity and hope it can continue.